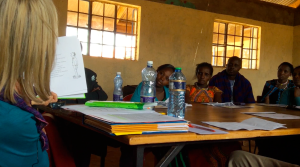 
Saturday was my idea. A nice big meet and greet for the teachers and community members. A lunch. I knew rituals and celebrations are woven into the fabric of African life in general and the Maasai were no exception - whether it is the Ethiopian coffee ceremony or the serving of Chi in Maasailand. Chief Joseph was very pleased with my idea. “Oh, this will be very good!”, he beamed when I made the suggestion during one of our many planning conversations.

So a little more one day after touching down in Nairobi and after our first hectic, disorienting night in our guest house bunk beds, indoor toilet without plumbing, no running water, navigating a strange house in the absence of electric light, no mirrors or a hook to hang a thing on, Michelle, Joe and I and the Chief were off to Kimuka Village School bright and early.

The school was 20 exceedingly bumpy minutes from the house. We pulled up to the padlocked security gate which need unlocking. We were the first to arrive. To wait for the key bearer and the guests we were shepherded down the road to Floricana, a small eatery.

There we met Samson and his 2 children. Samson, a teacher at the school, has a smile and a kinetic energy that reconfigures the molecular space he occupies like heat on ice. Before the end of the day we would have the measure of the man as well and found that too to be impressive.

The school is a right angle of continuous classrooms facing onto a wide expanse of dusty soil, save for a few good sized cactus, a circle of rocks around a flag pole and one lone tree. We were led to one of the rooms. I was asked how I would like the furniture arranged. Then we stepped outside while the floor was swept of the layer of brown dust that had accumulated during the August school break and tables and chairs were recruited from other rooms to form a big rectangle in the center. (I had learned in Ethiopia the idea of setting up ahead of time just doesn’t make African sense. When it’s time you do what has to be done.)

Sitting around the table were the principal, the KIMUKA School teachers who would be in the Pilot Project: Rebecca, Lucy, Mercy and Mary the 2 prospective coaches (Samson and Jackie) 3 teachers from other primary schools and a school district administrator (Steven).

I was disappointed to learn the representative from the Ministry of Education, Joseph said would be invited, was not there. His absence, according to Joseph, was due to washed out roads from the previous day’s downpour.
I had given a great deal of thought to crafting this first meeting. More accurately, I agonized over what to say. Everything from the correct greeting (gender, number, formality of the occasion) to the briefest possible explanations of the key points about the project and its contents to finding visuals that would make a lasting impression.

Once we were settled in the computer room, in name only, it was a foregone conclusion that our meeting would be shortened and I had some quick editing decisions. But once The Chief’s announcements, the principal’s welcoming words and the prayer was lead, I had about one hour to make my case for the pilot project. I didn’t know I would actually be preaching to the choir.
No comments:

The proverbial handwriting was on the airport wall. The night of my arrival in Nairobi Kenyatta Airport was (or could have been) a signal to my 15 hour sleep deprived brain that the mundane was going to be in stiff competition with the mission. The mission – start up my one-year pilot project on the teaching of thoughtful reading and writing in an under- sourced rural community

And so it has been. Retrieving my two large and one medium sized suitcases banded in bright colors for easy identification, was the first flag. Hopeful watching of the “It’s a Small World After All” ride of packaged humanity was futile. Unfortunately, that was not known to me until 3:30 AM, 3 hours after our 3 hour late arrival. 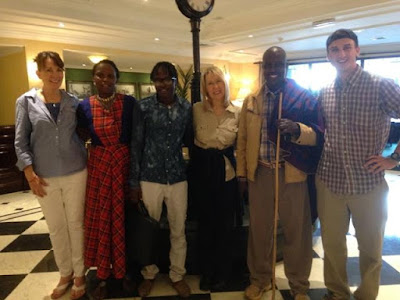 After a few hours sleep at our old friend, The Sarova Stanely Hotel in the heart of Nairobi’s business district, we were in the lobby giving elated, 2 cheek air kisses to Chief Joseph, wife Cecilia and in short time, Joseph Nderitu, the young man Howard and I are sponsoring for a diploma in Hotel Management and Hospitality from a Nairobi college.


Not long after we packed ourselves into the hired car Chief Joseph came in, we were on our way to his village in Maasailand. (Young Joseph would join us on the following Wed.) On the the trip from urban Nairobi to the rural you pass intermittent roadside stretches of furniture and other wares for sale. About 20 minutes into our trip, Imperative Kswahili instructions were followed by an abrupt pull over. Chief Joseph, dressed for NY creds but for the red plaid wrap draped over his shoulder, left the van and returned some minutes later bearing a hospitality gift for his visitors – a brand new shellacked, wooden commode!

At first he wedged the gleaming wooden box with the flip top between Cecilia and the baggage in the rear of the van but the road was bumpy (didn’t know how bumpy till we left the paved part of thetrip) so after the third time I nagged about the potential injuries to Cecilia, Chief Joseph repositioned the piece between his own knees where it stayed for the hour or so it took to reach our new home away from home.

The Guest House met our eyes with a combination of relief and wonder. During the last 40 minutes of our trip from Nairobi, the road turned downright nasty. Joseph explained that the government started making a road into the interior of Maasailand but then decided they had done enough. They did return to remove some of the major rocks but what remained can only be good news for Good Year and Toyota. Tires and suspension parts have about a 6 month life span on that terrain. The locals traveled either by foot or motor scooter. When it rains, and when it rains it dumps water, the gullies we passed fill to over flowing and the roads are impassible.

So much for the relief we (our backs particularly) felt when we arrived. You can imagine the wonder of seeing a large western structure standing out on the otherwise vast, flat, parched land. Anything else of a vertical nature would be cows, Maasai people walking, small tin-roofed dwellings and the ubiquitous Acacia trees. (Having never seen one really up close and perhaps not in the dry season when they are without any folliage, I never knew that they all thorns.) I am sure we were all thinking the same thing as we spotted a large house off in the distance, OK this will be a piece of cake!

We soldiered on for 2 weeks at the guest house. Intermittent solar light, no running water, no success with the use of thumb drive modems for WiFi connections, and really tight sleeping space (Michelle and I shared a bunk bed and a closet- well part of a closet) required full-time logistics planning and management.


I developed a deep understanding for the part our surroundings play in our sense of groundedness and well-being. When nothing can be taken for granted – not brushing your teeth and washing your face, not flushing the toilet (we did have a toilet in the house but flushing required asking a lovely young woman named Christine to lug a very large bucket of water from the cistern outside) and not having any food item that requires refrigeration.

Once the opening Saturday meeting and lunch was done and the week of workshops for the teachers was over, Michelle, Joe and I realized the impossibility of getting any of the communications work done while living at the Guest House. In order to get connected we had to get to Ngong where there are internet cafes. The car trip was arduous and the cost, round trip – $60. Nobody was cutting us any breaks.


A dear woman who I met in Nairobi in 2010, owns a car service business. I called Maggy and told her we needed to find lodging. Despite all good intentions, our next move was something out of “The Griswalds Family Vacation” minus the vacation and the humor. This Guest House also looked good enough from the outside, we arrived baggage in tow feeling kind of desperate and dirty. We were envisioning the hot shower, the flushing toilet, comfortable beds, refrigeration, a mirror, a closet or a hook perhaps… and internet.

Well we did get internet. At the end of night 2 Michelle was checking Airbnb and came up with a great find. So now I am in a very reasonable rental house in Karen. (Many nice houses behind gates in Karen.) Two shopping malls within 5 to 10 minutes. House help on the premises. And I for one, have no illusions about the distinction between wanting to share what I know with people who want to know it with going Peace Corps. I signed on for the former.
No comments:

This blog will share the literacy teaching practices that brought relief to the frustrated early-grade teachers I worked with in Ethiopia and Kenya – teachers who, despite their best efforts, watched their students advance from grade to grade without becoming readers or writers. We will target the teaching that takes place at that crucial intersection between teacher and student.